Philippine films and collaborations with U.S based actors like Lourdes Duque Baron and voiced by Clint Jung is a sign of a steadily growing collaborative film industry.

” Butanding”, is an emotional and riveting epilogue, the story entailed evocative acting from the actors- the film is poetic, and does not seek to fulfill the audience perceived imagination of how a film should be made, rather it focused on the raw feelings and emotions.

Precious Lara Quigaman, shows her never before seen acting prowess when it comes to drama- the movie is simple and yet very appealing. One can feel the emotions of the actors through the shots.

The environmental message and advocacy are carried on through the film, and viewers are invited to learn more and connect with the creatures of the ocean.

Film critics loved the elements of the musical score, the alignment of the clips, the emotions that the actors gave and the cinematography blend – leading to a heartfelt performance.

Butanding, an environment-conscious film brought to you by Timeless Entertainment Inc., is now being remastered digitally by Big M Entertainment.

Ms. Lourdes Duque Baron, tells us that the film is going to be purposely remastered digitally in Hollywood to cater to the international clamor received by the film in its initial release last year. This will include an English subtitle and a narration by the internationally acclaimed actor – Clint Jung as it aims to bring it to a wider audience with a fresh new enhanced storyline.

Butanding tells a story about the endangered species and their plight. It is a riveting tale of compassion and love. It is a collaboration with some of the known artists’ in the country as they come together to bring this relevant environmental issue into the limelight. 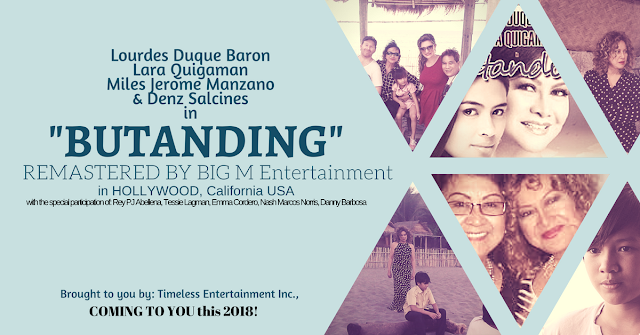 With the introduction of Ailxy Barbosa and Miles Jerome Manzano with Tessie Lagman, and Nash Marcos.

The film has a lot to offer its viewers! Definitely, something to look forward to this coming 2018.

Let us continue to be proud of such nationalistic movies that matter and are truly relevant to the ever-changing world we live in.